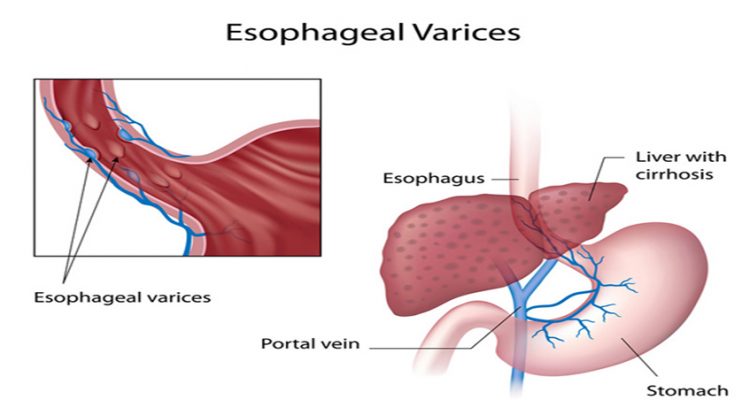 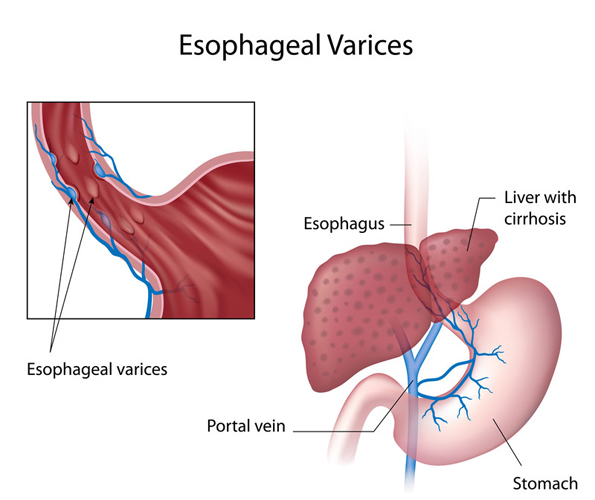 The esophagus is the muscular tube that connects your mouth to your stomach. The veins in your lower esophagus near the stomach can become swollen when blood flow to the liver is reduced. This may be due to scar tissue or a blood clot within the liver.

When liver blood flow is obstructed, blood builds up in other blood vessels nearby, including those in your lower esophagus. However, these veins are much smaller, and they’re incapable of carrying large amounts of blood. They dilate and swell as a result of the increased blood flow.
The swollen veins are known as esophageal varices.

Esophageal varices may leak blood and eventually rupture. This can lead to severe bleeding and life-threatening complications, including death. When this happens, it’s a medical emergency.

Esophageal varices are unlikely to cause symptoms unless they have ruptured. When this happens, you may experience:

Esophageal varices are more likely to bleed if you have:

To diagnose esophageal varices, your doctor will perform a physical examination and ask you about your symptoms. They may also use one or more of the following tests to confirm the diagnosis:

⦁ Blood tests: These are used to evaluate blood cell counts and liver and kidney function.
⦁ Endoscopy: During this procedure, a small lighted camera scope is inserted into the mouth and used to look down the esophagus, into the stomach, and into the beginning of the small intestine. It’s used to look more closely at dilated veins and organs. It can also be used to take tissue samples and treat bleeding.
⦁ Imaging tests, such as CT and MRI scans: These are used to examine the liver and abdominal organs and evaluate the blood flow in and around these organs.

The main goal of treatment is to prevent esophageal varices from rupturing and bleeding.
Controlling portal hypertension

Controlling portal hypertension is usually the first step in lowering the risk of bleeding. This may be achieved through the use of the following treatments and medications:

⦁ Beta-blockers: Your doctor may prescribe beta-blocker medications, such as propranolol, to lower your blood pressure.
⦁ Endoscopic sclerotherapy: Using an endoscope, your doctor will inject a medication into your swollen veins that will shrink them.
⦁ Endoscopic variceal ligation (banding): Your doctor will use an endoscope to tie off the swollen veins in your esophagus with an elastic band so they can’t bleed. They’ll remove the bands after a few days.